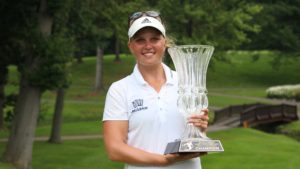 Nanna Koerstz Madsen won the 2017 event, earning a promotion to the LPGA tour.

Brook-Lea Country Club, along with the LPGA’s Symetra Tour and Upstate Golf Charities, Inc. are proud to bring you the Danielle Downey Classic.

The tournament is named after Danielle Downey, Rochester’s most accomplished female golfer. Downey learned the game as a junior golfer at Brook-Lea Country Club, making this event special to everyone involved. During her career she won three consecutive New York State Women’s Amateur titles. She also starred on the NCAA Div. I Auburn women’s golf team, where she earned All-American honors in 2000, 2002, and 2003.

Following her amateur career, Downey pursued a career on the pro tour circuits, working her way up from the developmental Futures Tour to fully exempt status on the LPGA Tour. After a hand injury ended her professional playing career, she returned to Brook-Lea Country club to host an annual junior clinic with several other LPGA golfers. At the time of her passing, she was once again at Auburn, working for the school coordinating both the men’s and women’s golf programs. 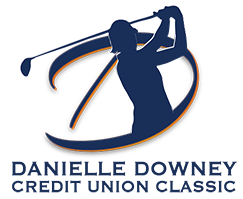 Annie Park took home the inaugural Danielle Downey Classic title. Park, just 20 at the time of her victory, was competing in just her fourth event as a professional. The 72 hole event is unusual on the Symetra Tour, and Park’s hard fought victory required a delicate up and down on the 18th to hold off challenger, and LPGA veteran, Vicky Hurst. Park would go on to be named the Symetra Tour’s rookie of the year. Park went on to gain her first LPGA win at the 2018 ShopRite LPGA Classic in New Jersey. The field also featured 17-year-old Canadian Brooke Henderson who finished 5th in the US Open, and the LPGA Championship, and won on the LPGA Tour by an astonishing 8 shots three weeks after our event.

The 2016 Danielle Downey Classic was won by Clariss Guce, originally from the Philippines but playing out of Artesia, CA.  Guce overcame a triple bogey on the par 3 12th hole in the final round.  Guce birdied the par 3 18th hole to finish one shot ahead of Sophia Popov (Germany) and Ally McDonald (Fulton, MS).

The 2017 Danielle Downey Classic was won in dominant fashion by Nanna Koerstz Madsen of Denmark.  Madsen had had also represented Denmark at the 2016 Summer Olympics.  She finished 7 shots ahead of runner-up Laura Wearn (Charlotte, NC).

Weekly and daily tickets can be purchased online at DanielleDowneyClassic.com.

Looking for information on attending or volunteering for the Danielle Downey Classic? You can find tickets, parking, volunteer, and pro-am information on the dedicated tournament website at DanielleDowneyClassic.com.